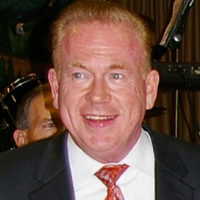 Donny Golden was born on May 6, 1953, in Brooklyn, New York. He grew up in a strong Irish American community in culturally diverse Brooklyn. Both his parents were from Ireland: his father from Williamstown, County Galway, and his mother from Glangevlin, County Cavan. Donny and his eight siblings had to learn Irish music and dancing as children. At the age of seven, Golden began taking step dance lessons with a master teacher, Jerry Mulvihill. After three years with Mulvihill, Golden, along with his four brothers and four sisters, studied with the legendary dancer Jimmy Erwin in his step dance school just five blocks from the Golden home.

Donny started teaching on his own when he was 19. Since then, the Donny Golden School of Irish Dance has trained scores of dancers, including several who have placed in the world championships. One of his students, John Jennings, won the world title in 1989.

Donny Golden continued to perform, long after retiring as a competitor. Since 1978, he has been a member of Green Fields of America, the top ensemble of Irish traditional performing artists in the United States. He is also a regular guest dancer with the only all-women’s group in Irish music, Cherish the Ladies. Golden has toured nationally with the acclaimed Irish ensemble the Chieftains and has performed in hundreds of concerts throughout the United States for more than 20 years. In 1995, Donny was awarded the National Endowment for the Arts National Heritage Award & Fellowship. He is the only Irish dance teacher to have received this honor. This prestigious award is granted to master folk and traditional artists to recognize their artistic excellence and to support their continuing contribution to America’s traditional arts heritage.