Welcome To The Donny Golden School of Irish Dance 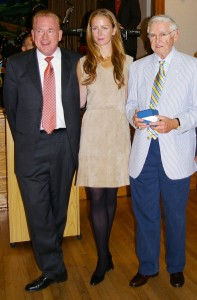 The Donny Golden School of Irish Dancing began in 1972 when Donny started teaching at the age of 19. His school grew as Donny’s strong traditional style and innovative choreography drew attention. The Donny Golden School is one of the premier Irish dancing schools in the world and has been for over 30 years. Donny Golden, is one of the most well-known and accomplished Irish dancers in America today. He has trained hundreds of dancers and his school and its students have won many awards locally, regionally, nationally and worldwide. His dancers have competed throughout the world and performed for and appeared on many television shows and documentaries and in such acclaimed entertainment venues such as Town Hall, New Jersey Performing Arts Center, Carnegie Hall, Radio City, Lincoln Center, the Kennedy Center and the White House, and with performers such as Shania Twain, U2, The Chieftains, Cherish the Ladies, Frank Patterson, The New York Pops, Savion Glover and Bebe Neuwirth.

The popularity of Irish dancing still continues to grow stronger with broad, global appeal due in part to shows that have entertained worldwide such as Riverdance, Lord of the Dance and the highly acclaimed Dancing On Dangerous Ground. The Donny Golden School is the home of Jean Butler who has helped bring Irish dancing from the competition stage to the world stage.

Donny Golden instills a love of Irish dance in the many students that are drawn to this style of dance.